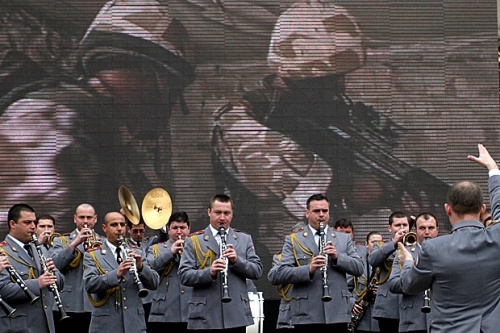 Bulgaria started Sunday the series of events to celebrate the fifth anniversary since the country joined NATO, and the coming 60th birthday of the Alliance.

The celebrations kicked off with an open concert of military orchestras in front of the Bulgarian National Theater "Ivan Vazov" in downtown Sofia.

A large video wall is installed in front of the National Theater. During the celebrations it will be running excerpts from documentaries about the foreign missions of the Bulgarian Army.

The celebrations for the fifth year since Bulgaria's NATO accession will culminate with a fireworks show in several large Bulgarian cities starting at 9 pm Eastern European Time.

The Bulgarian Army orchestras are going to hold concerts not only in Sofia but also in Varna, Plovdiv, and Pleven.

A number of events celebrating NATO's 60th birthday are scheduled to take place throughout the country in the coming days.

NATO was founded with the Washington Treaty on April 4, 1949. It started with 12 members, and now has 26 members after its last round of expansion in Eastern Europe in 2004.