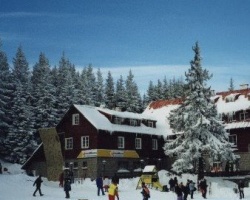 The Bulgarian PM appealed to all Bulgarians to support local tourism by taking their vacations at the country's winter and beach resorts.

According to the Prime Minister, Sergey Stanishev, everything Bulgarian needed to be supported during the times of global financial crisis.

Stanishev spoke Sunday at the Vitosha Mountain near Sofia where he gave awards to the best young skiers, who participated in the initiative under the motto: "Learn to Ski". The ceremony took place in front of the "Aleko" mountain cabin, where 20 children from grades 1 to 4 received awards.

The initiative of the Bulgarian Ski Federation has included 3,300 Bulgarian children so far. They have all been able to take advantage of free ski lessons.

Stanishev told the children that he used to skip school in order to go skiing, but advised them not to follow his example.

When asked where he was going on vacation, the PM replied that if he was able to rest at all, he would go on the Bulgarian Black Sea cost, adding that the elections would not be the main reason for him to cancel vacation plans.

Stanishev appeared at the Vitosha cabin with his long-time girlfriend, journalist, Elena Yoncheva, and his two dogs - the Labrador Dana and the English bulldog Barry.