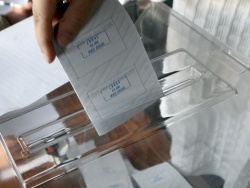 The initial investigation confirmed that one of the nominees for mayor was present while the money were given. File photo

An investigation over vote trading has begun Friday in the North Bulgarian village of Brest.

Twenty five workers in a shoe company in the village were given BGN 50 Friday evening. The initial investigation confirmed that one of the nominees for mayor was present while the money was given, the police press office announced.

On March 20, a signal was received in the police that the owners of the shoe factory were giving money to their employees. The money was said to be an advance payment.

The police said though that the workers had not been paid since December 2008.

The investigation is in progress, and all the witnesses, including those who received money, are being interrogated. It turned out that the workers had a strike on March 13 and 14, demanding their wages.

The mayor election in the village of Brest was appointed for Saturday. No violations have been reported. Representatives of six political parties are competing for the mayor position.