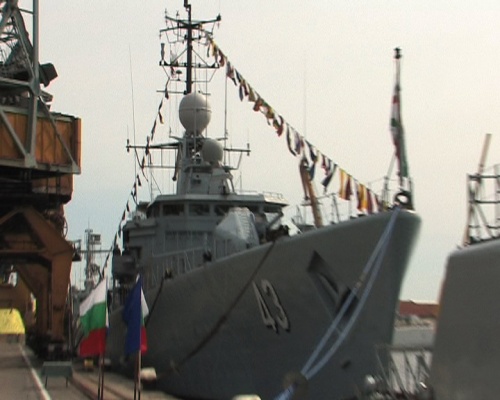 The Bulgarian Navy baptized formally its two new frigates "Verni" and "Gordi" that it bought second-hand from Belgium. Photo by BGNES

Bulgaria's naval base in Burgas held Friday a ceremony for the formal baptizing of the two second-hand frigates the country bought from Belgium.

The ceremony for the naming of the two frigates "Verni" ("Faithful") and "Gordi" ("Proud") was attended by the Bulgarian Defense Minister, Nikolay Tsonev, and his Belgian counterpart, Pieter De Crem.

The transfer of the two second-hand vessels is part of a deal for over EUR 50 M under which Bulgaria gets from Belgium two used frigates and one used minesweeper.

The first frigate is already part of the Bulgarian Navy under the name "Gordi" ("Proud"). The second frigate "Verni", known in the Belgian Navy as F910 Wielingen, and the minesweeper M922 Myosotis ("Forget-me-not"), which has been renamed to "Tsibar" arrived to Burgas after setting off from the Belgian naval base at Zeebrugge on February 12 with their Bulgarian crews.

The transfer from the North See to the Black See was the first of its kind in the history of the Bulgarian Navy, whose activities are usually confined to the Black See, and, occasionally, to the Mediterranean.

The Bulgarian crews of the two ships went to Belgium in September 2008 in order to be fully trained to use them. Their work organization and training are completely according to NATO's standards.

The Belgian frigate F910 Wielingen, now renamed "Verni", was launched in 1976, and was decommissioned in 2007. In 1990-1991, it took part in the UN maritime embargo against Iraq - Operation Southern Breeze during the First Gulf War.