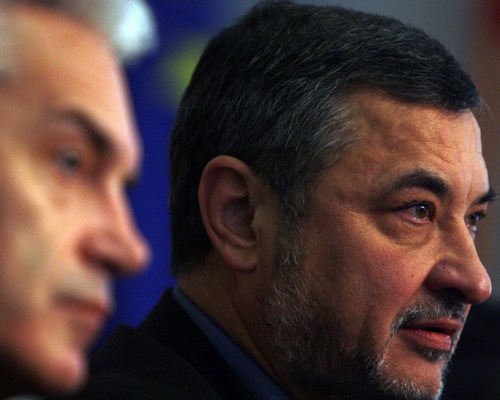 The Chair of the Burgas City Council from the Ataka party, Valeri Simeonov (right), has expressed his satisfaction with the decision against the building of a mosque in the city. He is shown here with the Ataka party leader, Volen Siderov (left). Photo by

The Muslim community in the Bulgarian Black Sea city of Burgas is going to file a complaint with the EU institutions over a city council decision against the construction of a mosque.

On Thursday, the Burgas City Council voted overwhelmingly to rescind its own decision from December 2008, which allocated a plot in the Meden Rudnik ("Copper Mine") quarter for the construction of a new mosque.

Only one city councilor from the ethnic Turkish Movement for Rights and Freedoms voted against the decision.

The motion for the annulment of the earlier decision in favor of the construction of a new mosque came from the GERB party, whose informal leader is the Sofia Mayor Boyko Borisov.

The GERB city councilors have motivated their move with their desire to preserve the ethnic and religious peace in the city, and with the pressure they had been facing by the extreme right and nationalist Ataka ("Attack") party, BGNES news agency reported.

While Burgas has a GERB Mayor, the far right Ataka party holds a majority in the city council.

The Muslim community in Burgas, which numbers about 1 600 persons, believes the city council decision showed disrespect for the Muslims in the city. Its representatives have stated their intention to seek aid from Members of the European Parliament from the DPS party.