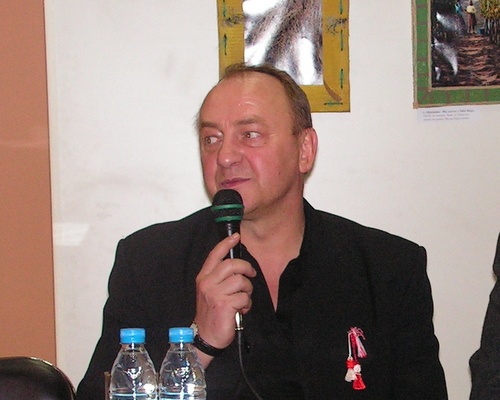 The Polish writer, Janusz Wisniewski, during the presentation of his book, Loneliness on the Net, in Sofia, wearing a Bulgarian martenista. Photo by Polski Centar

Janusz Leon WiЕ›niewski was born in 1954 in Torun, Poland. He holds Masters degrees in physics and economics from the Copernicus University in Torun, a Ph.D. in computer science from Warsaw University of Technology and Habilitation in Chemistry from the Technical University of ЕЃódЕє.

Wisniewski is one of the authors of the computer program AutoNom, a naming tool for organic substances in the IUPAC nomenclature. Currently WiЕ›niewski lives and works in Frankfurt, Germany.

Wisniewski's most famous novel is "S@motnoЕ›Д‡ w Sieci", translated in English as "Loneliness on the Net". It was first published in 2001, and has been translated into many languages. There is a popular Polish film based on the novel.

Wisniewski was in Sofia in March, 2009, for the presentation of the Bulgarian edition of his book "Loneliness on the Net", which is published in Bulgaria by Ciela Soft & Publishing.