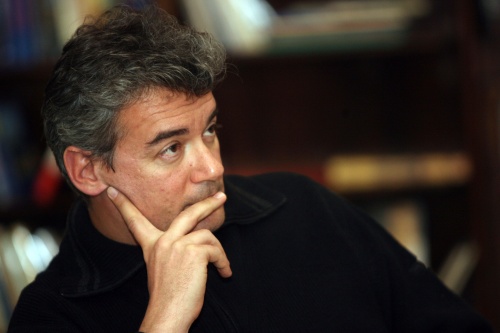 The German-Bulgarian author, Iliya Troyanov, has presented the Bulgarian edition of his book "Nomad on Four Continents" in Sofia. Photo by BGNES

Question: Bulgaria loves being proud of the achievements of its immigrants. Would you say that Bulgaria has to the right to be proud of your achievements, given you family history?

Answer: I think the problem with this patriotic pride is that it is usually not linked to a serious understanding of what the artist is doing. It's a knee-jerk reaction. They hear that someone is originally from Bulgaria, he's won a big award, he's famous in the world, so, "Wow, we are proud of you." That of course I find ridiculous.

When someone reads my books and says, "I'm proud of you", that's absolutely ok because that's an expression of profound interaction, communication with my work, and I am absolutely happy to hear that. It makes me also proud to hear that there are now many readers of my books in Bulgaria. The only thing that I am opposed to is that they actually say they are proud of you, and then you ask them, "Have you read any of my books?", and they say, "No." So how can you be proud of someone when you don't know him.

Q: To what extent do you consider yourself Bulgarian?

Just to give you one example. There is this wonderful Bulgarian word "kef" ("РєРµС„" - pleasure, ease). It comes from Arabic, and in Arabic it is "keif". Now, this concept of "kef" exists only in this part of the world - the Balkans, the Arab World, all the way to India. You go further east - China, Japan, Korea - it doesn't exist there. You go further west - Germany, Sweden - it doesn't exist.

So this is very typical of a certain cultural region, and it is something which other people don't have. When you look at Germans, for example, they don't have a world for "kef", and they don't understand the concept because what a German does when he is not working - he is doing something else. He has a hobby, he is very eager to be active, he builds something, or he does sports, or he organizes something. So this is an Oriental concept of just sitting there, and looking at the sky, and enjoying nothing. That, for example, I think is typically Bulgarian, and I sense that I have a certain affection for that.

Q: In your book, "The World Is Big and Salvation Lurks around the Corner", and the movie based upon it, apart from the drama of the characters, it is really striking how the former communist apparatchiks were building "new" Bulgaria. As a researcher of communism, how do you think Bulgaria has gone in terms of overcoming its communist past?

A: Nowhere. I think the Bulgarian track record is the worst in Europe. I don't know about Albania but besides Albania, it's the worst in Eastern Europe, and that is exactly the problem. I have been saying that for the last 20 years. That is Bulgaria's problem. Because when you look at the societies that are being successful in their transformation, it's very, very evident that they have also been very, very critical of the communist past.

So there is evidently a link between reassessing the past, learning from the past, putting the past to rest, and building a new future. In Bulgaria, the first step hasn't started, we are still living the past because in all levels of society you have an elite, which has grown out of the old nomenclature, which now is a new oligarchy and mafia.

So as long as that is the fact, as long as you have not started to overcome the past, you cannot start the future. That's a common worldwide phenomenon. We've seen that in so many countries - in South Africa, Guatemala, Argentina - so many countries, where only when they started really dealing with the crimes and the tragedies of the past that that opened up possibilities for a better future.

Q: What is it that the person from the Global Age should take from the personality of Sir Richard Burton, to whom you dedicated two books including "Nomad on Four Continents"?

A: I think the main aspect will be curiosity. There is one big danger of the globalized world, and particularly the international media, and that is that we sometimes have the illusion we know everything. You switch on the TV, and you see something about India, and about South America, so one might actually be fooled into thinking that, "OK, I know about the world." But actually this is a very superficial and subjective reflection and representation of these foreign lands, especially I think in today's world it's very important to retain a certain curiosity and to look at the world with open eyes.

Q: Do you believe that the cosmopolitanism of the Global Age, and of the sort that Sir Richard Burton had it, would actually bring uniformity - a kind of a global "melting pot" in which small nations will be wiped out?

A: The main question when you reflect upon this is language. Now, language is something which I think is linked to the political sphere because how you sustain a language is also a political program.

Bulgaria knows that because the independence movement against the Ottoman rule was based on language. You can see very clearly that many of the people involved then were - and that is why we still honor them today - people who believed that actually education was at the center of liberation.

Now, when you look at today's Bulgaria there is absolutely no understanding of that. The budget of the Ministry of Culture and of Education is ridiculous. The state-run school system is pathetic so anybody who has some money sends their children to private schools. Universities are in a bad state. Actually, I have a very good different example: Finland.

In Finland they have a very, very clear understanding that Finnish is a very small language, very unique, only related to Hungarian. So they put up an enormous effort to sustain Finnish. And it is working. People are proud of their Finnish language.

In Bulgaria, it is always rhetorics. Everybody claims to be proud of the Bulgarian language, but when you look at it in the public sphere, politics, education, there is no support for Bulgarian language, culture, literature, theater, all of them are in a very bad state. That's where the problem lies.

Q: Bulgaria's politicians, society have been trying to prove really hard for the last 20 years that we are Europeans. Given your experience with the so called developing countries, do you think Bulgaria is closer to the West or to the developing states?

A: Well, let's take a few examples. When you look at Sofia as a city. It actually reminds me, and always has, more of an African or Oriental city. If you look at the streets, or at the garbage now. That kind of garbage I have seen in India, but I have never seen it in Western Europe.

Q: What would you say to those Bulgarians who want to change the situation in the country? Would it be better to stay in Bulgaria, or to go abroad and try to influence things from there?

A: Well, you know that after 1989 1,5 million mostly young Bulgarians left Bulgaria and that is part of the problem. I think that people overestimate the difficulties because when you start protesting things in order to change them people in power always become very, very cautious, because there is a relationship between power in protest, and usually power is very arrogant when there is no protest. But the moment protest comes in, they start to become very alert because they know from human history that protest can explode. We've had a few small explosions in Bulgaria but the next day they die out. So I think people should not be afraid to organize themselves to protest even in small things because that's how change starts.

Q: What would be your advice to a foreigner who wants to understand Bulgaria? What is the basic thing they should do?

A: Well, they have to learn Bulgarian. It's impossible to understand Bulgaria without knowing Bulgarian. Otherwise, it's difficult to say but one of the funny things whenever I've met foreigners is that they don't even know Sofia. I mean, for example, to understand the social problems of Sofia, you have to go to the suburbs. If you've never walked through Lyulin or Mladost, you don't what Sofia is. If you have only seen Oborishte, Lozenetz and Vitosha, you don't know Sofia. That's what I did whenever I went to a new city. In Bombay - the first year I walked everywhere to get a sense of the place. And then you start understanding it.

Q: You've lived in many different cities and countries. Can we expect to see you spent a few years in Bulgaria at some point?

A: No, I am very happy in Vienna now, I come back very often but I wouldn't live here.