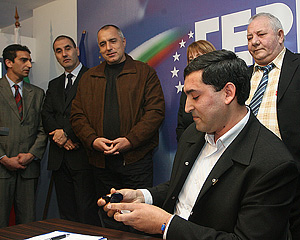 The Sofia Mayor and informal leader of the Citizens for European Development of Bulgaria, (GERB), party declared Thursday that he was considering appointing a Roma as Minister after the Parliamentary elections. Photo by Sofia Photo Agency

Boyko Borisov, Sofia mayor and leader of Bulgaria's right-wing GERB party, who is widely believed to eye the prime minister office, said he was considering a Roma minister in his future cabinet.

Borisov spoke upon conclusion of the signing of a memorandum for collaboration and joint intent between the Citizens for European Development of Bulgaria (GERB) party and social and non-governmental organizations, including Roma organizations.

The Roma representatives, reportedly, said that they were not offended by a recent statement, made by Borisov during a meeting with Bulgarian ex-pats in Chicago, where he said the country's main problem was its "bad human material" which included the Roma, the Turks, and the retirees.

The memorandum's goals contain a clause for the inclusion of educated and qualified Roma in all levels of the Bulgarian government.

"By separating the elections for Bulgarian Parliament from those for the European one with the motif that the voters will become confused, the Bulgarian Socialist Party (BSP) and the Turkish Movement for Rights and Freedoms (DPS) insulted their electorate much, much more. Isn't this a direct admission that people who vote for BSP and DPS cannot ever read the ballots?" Borisov said, cited by Darik radio.

The GERB leader pointed out that, despite the still low percentage, there were Roma in Bulgaria holding two or three degrees.

"We will consider, if we manage to form our own Cabinet, appointing a Roma Minister and Deputy Ministers, to include them directly in the country's government, to represent large social groups and be accountable to them," Borisov declared.