Bulgarian Arrested in Romania over Alleged Spying for Russia 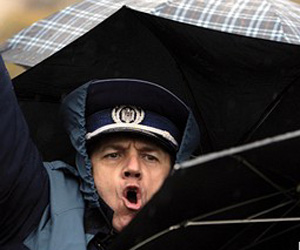 The Bulgarian National radio (BNR) reported that Zikulov, who had a consulting company in the Romanian capital, has been accused of leaking military secrets to a third country that was not an EU and NATO member.

According to Romania's Cotidianul daily, the two were supplying top secret documents to a Russian representative for which they were paid significant amounts of money. Some Romanian media list the name of the alleged Bulgarian spy as Marinov Zikolov.

The Bulgarian Embassy in Romania stated that they were making all possible efforts to clarify the case and provide legal protection for Zikulov.

The Romanians have officially declared that the accusations were not against Bulgaria and Zikulov's actions had nothing to do with his native country.

Romanian authorities, including prosecutors, intelligence officers, army and police officers, have begun a mass investigation into the case. Local media write that this has been a major national security breach.

Both Zikulov and Achim have been detained with a Prosecutor's order and will spend 29 days behind bar, the maximum in Romania, over charges of international espionage.