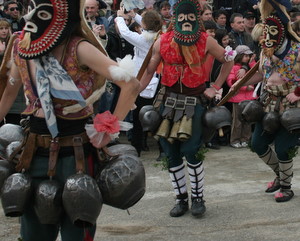 Over 500 kukeri took part in the folklore carnival in the Bulgarian village of Shiroka Luka. Photo by BGNES

Over 500 Bulgarian Kukeri from all across the country attended Sunday a traditional folklore carnival procession in the Bulgarian village of Shiroka Luka in the Rhodoppe Mountains.

"Kukeri" is an ancient Bulgarian ritual in which costumed men dance in order to scare away the evil spirits.

The Shiroka Luka carnival called "Pesponedelnik" attracted thousands of guests from around the country as well as foreign tourists from the nearby top mountain resort of Pamporovo and other resorts in the region.

On the occasion of the Orthodox Christian holiday of Sirni Zagovezni, a number of Bulgarian villages are honoring their ancient traditions with Kukeri processions on Sunday, March 1.

The costumes of the Bulgarian mummers, "Kukeri", are made of animal skins and horns, and of wood, and also include large bells attached to the belt. They are supposed to be as scary as possible. In the Bulgarian tradition, around New Year the kukeri walk and dance through their village to scare evil spirits away with their costumes and the sound of the bells.

The traditions is believed to have Thracian origins and can also be found in parts of some of the other Balkan states.

The village of Shiroka Luka is located 150 south-southeast of the Bulgarian capital Sofia in the District of Smolyan. It has only several hundred inhabitants but is an architectural and folklore reserve with unique features, and its proximity to a number of mountain resorts in the region brings a lot of tourists all year round.