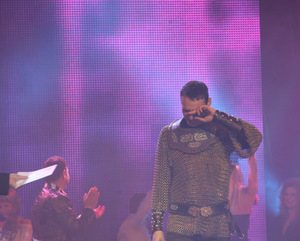 Prominent Bulgarian musicians and members of the social network Facebook continue to protest against Krasimir Avramov's song "Illusion," which was selected to represent Bulgaria in the "Eurovision 2009" finals in Moscow.Photo by Sofia Photo Agency
Amidst the brewing scandal surrounding the Bulgarian finalist for the "Eurovision 2009" song contest, the official organizer of the Bulgarian edition, Bulgarian National Television (BNT) admitted that they have been troubled by the quality of the song's performance.

The Director of the "Music and Entertainment" Division of BNT, Lyuben Kunchev, stated for the Darik radio that BNT had their own doubts about the way the song was performed at the Saturday concert.

Prominent Bulgarian musicians and members of the social network Facebook protested Tuesday in front of the BNT building in Sofia against Krasimir Avramov's song "Illusion," which was selected to represent Bulgaria in the "Eurovision 2009" contest finals in Moscow.

Avramov's song won with 55,52% of the spectators' vote during a concert held at the National Palace of Culture in Sofia.

The BNT Music Director told the Darik radio that he saw three possible solutions of the scandalous situation - Avramov to make the decision to withdraw, BNT to try to help the singer improve his performance and Bulgaria to withdraw from participation in the 2009 contest edition.

In case Avramov decides to withdraw his bid, the first runner-up, Poly Genova and her song "One Lifetime Is Not Enough" are going to represent Bulgaria in Moscow.

Kunchev further said that if Bulgaria was to decline this year's participation, this could cause future problems for the country, adding that BNT was going to make a decision by the end of February.

The Music Director stated that the song was a very strong one, with good chances to win, but Avramov needed to show he could deliver a better performance, adding that as an organizer BNT did not have the right to disqualify Avramov or to repeat the vote.

In the mean time, the Deputy Director of BNT, Dimitar Tsonev, met with the demonstrators, who demanded a new vote. He explained that the record 55,52% were the main cause for the controversy.

There is an online petition in Facebook demanding that the vote's results are annulled. The petition is titled: "Krasimir Avramov's Song for Eurovision Is a Disgrace to Bulgaria." It can be found at:
http://bgpetition.com/sprete_da_ni_lujete/index.html

Earlier Tuesday, Avramov vowed to participate in the "Eurovision 2009" finals in Moscow and to represent Bulgaria, explaining the scandal as coming from jealousy.

"Many people, especially among colleagues, have a hard time accepting somebody else's success," Avramov told the local reporter of Darik radio in the city of Sliven.