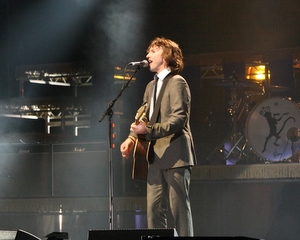 James Blunt celebrated his birthday, February 22, in the Bulgarian capital, and his audience sang "Happy Birthday" every time he made a pause during his concert.

The former British Army officer performed songs like Wisemen, Shine On, Carry You Home, Goodbye My Lover, Because I Love You, and his greatest hit, You're Beautiful.