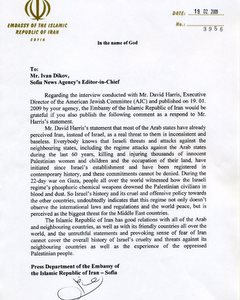 The official letter of Iran's Embassy in Sofia to Novinite.com

In the name of God

Regarding the interview conducted with Mr. David Harris, Executive Director of the American Jewish Committee (AJC) and published on 19. 01. 2009 by your agency, the Embassy of the Islamic Republic of Iran would be grateful if you also publish the following comment as a response to Mr. Harris's statement.

Mr. David Harris's statement that most of the Arab states have already perceived Iran, instead of Israel, as a real threat to them is inconsistent and baseless. Everybody knows that Israeli threats and attacks against the neighbouring states, including the regime attacks against the Arab states during the last 60 years, killing and injuring thousands of innocent Palestinian women and children and the occupation of their land, have initiated since Israel's establishment and have been registered in contemporary history, and these commitments cannot be denied.

During the 22-day war on Gaza, people all over the world witnessed how the Israeli regime's phosphoric chemical weapons drowned the Palestinian civilians in blood and dust. So Israel's history and its cruel and offensive policy towards the other countries, undoubtedly indicates that this regime not only doesn't observe the international laws and regulations and the world peace, but is perceived as the biggest threat for the Middle East countries.

The Islamic Republic of Iran has good relations with all of the Arab and neighbouring countries, as well as with its friendly countries all over the world, and the untruthful statements and provoking sense of fear of Iran cannot cover the overall history of Israel's cruelty and threats against its neighbouring countries as well as the experience of the oppressed Palestinian people.