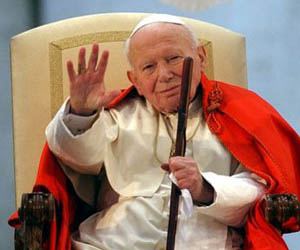 Pope John Paul II was allegedly the focus of a Bulgarian spy assassination plot. Photo by -tc.pbs.org
Soviet Union spies allegedly sent a Bulgarian assassin to Poland to kill Pope John Paul II during the Cold War to try and prevent the collapse of the Iron Curtain, Zdzislaw Krol, the Chancellor of the Warsaw Metropolitan Curia stated late Monday, cited by the UK Daily Mail newspaper.

Soviet Military Intelligence allegedly set up a Bulgarian assassin with secret details of the Pope's itinerary and train tickets to where he was due to speak, but he was betrayed by his Catholic wife.
The woman confessed to her priest Zdzislaw Krol who alerted the police. Officers later arrested the assassin.

Father Krol confirmed: "A woman told me that she had information of a possible assassination attempt."

"A husband or life partner of this woman, of Bulgarian origin, was in the possession of plans of the Pope's route through Poland's most holy city Czestochowa as well some train tickets. I called the security officials after which the would-be assassin was arrested."

Jan Zaryn, historian at the Polish Institute of the National Remembrance - set up to investigate war crimes committed by the Nazis and Soviet Union - confirmed the assassination attempt in 1987 from their files.

Mehmet Ali AДџca later admitted he had two Bulgarian accomplices in Rome at the time, including Zilo Vassilev, the Bulgarian military attachГ© in Italy.