Venezuela President Chavez Ready to Talk to US President Obama 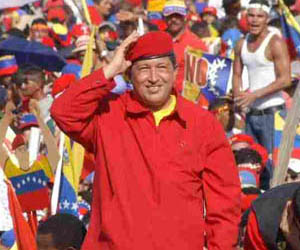 "Any day is propitious for talking with President Barack Obama," Chavez said at a news conference with foreign journalists ahead of the referendum. Chavez said he would be willing to meet with Obama before a summit meeting in April of Western Hemisphere nations. The White House has not yet responded.

The vote on Sunday over lifting term limits for Chavez and other elected officials was given more world media attention after the expelling of a Spanish lawmaker on Saturday who was in Venezuela as an electoral observer.

The referendum is the second time in 15 months that Chavez has sought to extend his stay in power beyond 2013, when his six-year term ends. Voters narrowly rejected an attempt in December 2007, which was bundled within a broader constitutional overhaul. Summing up the referendum on Saturday, Chavez said, "Venezuela is continuing on its march toward greatness."