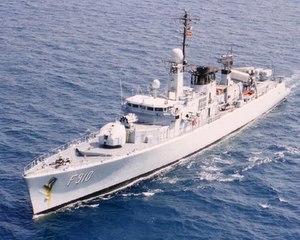 The Bulgarian navy has renamed the frigate F910 Wielingen to "Verni" ("Faithful"), and the mine sweeper M922 Myosotis ("Forget-me-not") to "Tsibar".

The Bulgarian crews of the two ships have been in Belgium since September 2008 in order to be fully trained to use them. Their work organization and training are completely according to NATO's standards.

The two ships were transferred from the Belgians to the Bulgarians at a special ceremony in the Zeebrugge military dockyard on February 9.

The transfer of the two second-hand vessels is part of a deal for over EUR 50 M under which Bulgaria gets from Belgium two used frigates and one used minesweeper. The first frigate is already part of the Bulgarian Navy under the name "Gordi" ("Proud").

The Belgian frigate F910 Wielingen was launched in 1976, and was decommissioned in 2007. In 1990-1991, it took part in the UN maritime embargo against Iraq - Operation Southern Breeze during the First Gulf War.