Bulgaria Parliament Votes "No" on Proposal to Investigate Police Brutality 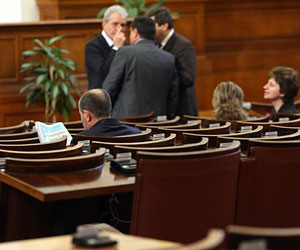 The Commission was supposed to focus on the events of January 14 2009, when Police clashed with demonstrators in downtown Sofia and on cases of people, who have died while in custody.

On Wednesday, the National Movement for Stability and Progress Party (NMSP) and the Opposition united around the idea of the establishment of an Investigative Commission, but failed to collect enough votes Thursday to realize it.

In two consecutive votes, the MPs rejected the proposal. The fact that MPs from the "Ataka" party were missing from the plenary hall proved decisive for the vote's results.

On January 15 2009, the Parliamentary group of the Bulgarian opposition nationalist "Ataka" party declared boycott of the work of the Parliament and demonstratively left the building. They further vowed to not return until after the upcoming elections.

Tatyana Doncheva, MP from the ruling Bulgarian Socialist Party (BSP) told her coalition partners from NMSP that they needed to be more careful because "their own weapons could sometimes turn against them."

Doncheva confirmed that the leaders of the parties from the ruling three-way coalition Sergey Stanishev of BSP, Simeon Sax-Coburg of NDSV, and Ahmed Dogan, leader of the ethnic Turkish Movement for Rights and Freedoms (DPS), were going to hold a meeting Friday.

The three are supposed to discus the interim report of the European Commission (EC) about Bulgaria, the Cabinet's economic pan to deal with the global financial crisis, and the upcoming Parliamentary elections and elections of Members of the European Parliament.