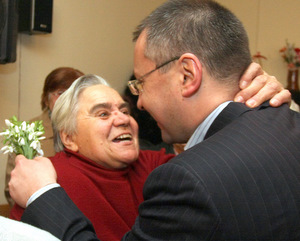 Retired people from a pensioner's club in the city of Pernik were extremely happy to meet with the Prime Minister and Socialists' leader, Sergey Stanishev (right), on Wednesday, presenting him a bouquet of snowdrops. Photo by BGNES
The Bulgarian Prime Minister Sergey Stanishev said Wednesday that the nation's greatest asset and advantage were its people, and that they could not be referred to as "human material".

Stanishev said this regarding the controversial statements of the Sofia Mayor Boyko Borisov in Chicago last week, in which Borisov claimed Bulgaria's main problem was its "bad human material" consisting of the Roma and Turkish minorities, and of some 2,5 million retirees.

"It is inconceivable to categorize people in this way especially if one claims to be a national political leader. This way of thinking is dumb and dangerous", Stanishev declared regarding the statements of Mayor Borisov, who is also the leader of the center-right GERB party.

The Prime Minister visited Wednesday the western Bulgarian city of Pernik where he inspected the recent repair works at a local lung disease hospital, and was later welcomed by retirees in a local pensioners' club.

During his meeting with the retirees, Stanishev pointed out their state budget pensions had been increased by 75% after his government took over in 2005. He also pointed out his cabinet had allocated the largest share of budget funding - over BGN 500 M - for the health care sector.

According to the Prime Minister, Bulgaria is financially stable despite the global financial crisis. and has sufficient reserves for social spending. He stressed the government's plan was to work with the businesses and the trade unions in order to preserve as many jobs as possible.