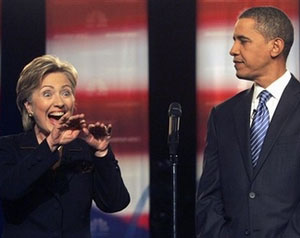 Clinton announces possible shelving of European missile defense system. Photo by gregdespres.com
US Secretary of State, Hillary Clinton, stated late Tuesday that the Obama administration might reconsider plans for a missile defense system in Europe, if Iran stops what U.S. officials believe is a drive for nuclear weapons. Clinton met with Czech Republic Foreign Minister Karel Schwarzenberg, whose government has agreed to host the system.

In a joint press appearance with her Czech Republic counterpart, Secretary Clinton reiterated concerns about the defense system, while also suggesting the program could be shelved altogether if Iran halts its pursuit of nuclear weapons.

Clinton said that the decisions on timing and deployment of the system are "largely technical matters" and said Iranian behavior would be a key factor in whether the program ultimately goes forward.

Clinton reiterated the Obama administration's interest in dialogue with Iran, following an assertion Tuesday by Iranian President Mahmoud Ahmadinejad that his government welcomes talks with Washington based on "mutual respect."