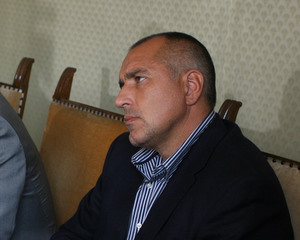 The Sofia Mayor Borisov outlined a plan for making Macedonia a friendly nation during his visit to Chicago. Photo by Yuliana Nikolova (Sofia Photo Agency)
During his meeting with Bulgarian immigrants in the St. Ivan of Rila Church in Chicago on Wednesday, the Sofia Mayor and informal leader of the GERB party outlined briefly his plan of turning the Former Yugoslav Republic of Macedonia into a nation friendly to Bulgaria.

Borisov's said he drew his ideas in this respect from the Greek. His strategy would include buying out Macedonian companies, i.e. taking over its economy, and exerting political influence of Macedonia's desire to join NATO and the EU.

"We can achieve all our goals with economic instruments... We can thus make them recognize their real history... And then we will have no greater friend and better neighbor than Macedonia. They will themselves love us", the Sofia Mayor said as quoted by the BGNES news agency which cites a report of the Sega Daily.