Pleven Socialists Cry out over Bulgaria's Portrayal in Report on CNN 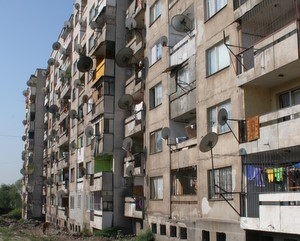 The showing of a Roma-populated apartment building in an international TV report on Bulgaria has spurred protests by the local BSP organization in Pleven. Photo by BGNES
The district organization of the ruling Bulgarian Socialist Party in the northern city of Pleven, has issued a declaration denouncing what has been described as "biased portrayal" of Bulgaria in a TV report shown on CNN.

The report in question was prepared by the independent UK TV station ITN, and later aired on CNN. It was supposed to show the living conditions of Bulgarian households during the recent gas crisis caused by the cutoff of Russian natural gas supplies.

The TV report was shot in an apartment building on Totleben Street in Pleven, whose residents are mostly Roma families.

"The report paints an extremely grotesque picture, and our declaration stresses our disagreement and outright objection against the way in which the image of the city of Pleven is discredited", the Chair of the Pleven Section of the Bulgarian Socialist Party, Lyubomir Petkov, declared.
Politics » Be a reporter: Write and send your article
Advertisement
Advertisement
Expats.bg All Are Welcome! Join Now!
More from Politics