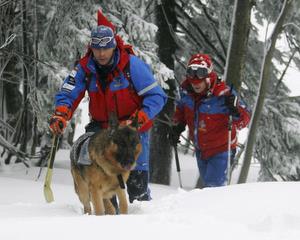 Despite the search efforts of 45 rescuers and five dogs, avalanche-buried snowboarder Viktor Gardev could not be found on time to save his life. Photo by BGNES
Рњountain rescue squads discovered around noon on Thursday the dead body of the 28-year-old Bulgarian snowboarder, who was buried by an avalanche in the resort of Bansko.

The body of Viktor Gardev from Sofia has been taken to the hospital in the nearby town of Razlog for an autopsy, the Speaker of the Regional Police Directorate in Blagoevgrad, Gergana Moralieva announced.

The snowboarder Viktov Gardev was buried deep in the snow by three consecutive avalanches at the Banderishka Polyana area, close to Mount Todorka. At the time the first avalanche hit, Gardev was with his girlfriend, Velika Stoichkova, who managed to escape the falling snow.

Stoichkova has already recognized the body of her boyfriend, who used to be a snowboarding instructor in the Bansko resort in 2007-2008.

Five squads with a total of forty-five mountain rescuers and five rescue dogs took part in the search for Gardev all day on Wednesday and on Thursday morning hoping he might be still alive.