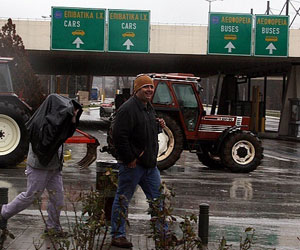 The Kapitan Petko Voivoda-Ormenion checkpoint will open briefly Sunday between 2 pm and 3 pm. The Kulata-Promahon and the Ilinden-Eksoho crossing points remain closed.

Bulgarian information agencies further say that the huge line of over 200 trucks remains at the Kulata crossing point while several trucks and cars are reported to be waiting in line at the Ilinden one.

At the Greece-Turkey border all freight traffic is cancelled, but buses and cars can pass, according to an hourly schedule.

The situation at the Greece-Macedonia border also remains complicated due to the blockades and road rconstruction. Passing through Kapitan Andreevo is also hampered by road construction from the Turkish side.

Bulgaria authorities advise Bulgarians traveling to Turkey to use the Lessovo and Malko Turnovo crossing points.

Since Wednesday, the protesting Greek farmers have blockaded thirty major transportation routes in continental Greece alone, including at the country's border with Macedonia and Turkey as well as the Athens-Salonika highway.

The Greek government has offered a subsidy package of EUR 500 M but it has been rejected by the protesters. It is not clear yet how long their blockades might continue.

In a letter to the Bulgarian media, the Greek Embassy in Sofia has expressed its regret over the ongoing problems at the Bulgaria-Greece border checkpoints caused by the protests of the Greek farmers.