Year of Bulgaria in Japan Launched with Arrival of Bulgaria's President 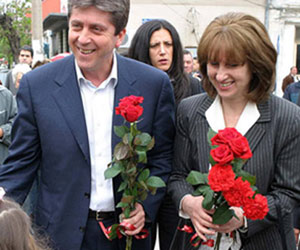 The visit will last until January 30. 2009 marks the 50th anniversary of restoring diplomatic ties between the two countries. Parvanov's visit will also coincide with the official start of the Year of Bulgaria in Japan and "2009 - Year of Japan-Danube Friendship".

The Bulgarian President and the First Lady will be welcomed by the Japanese Emperor Akihito and Empress Michiko, with whom they are going to have an official luncheon.

Parvanov is also going to meet with Japan's Prime Minister Taro Aso, and with members of both chambers of the Japanese Parliament.

The President will open a Bulgaria-Japan business forum, and an exhibit dedicated to the Cyrillic alphabet. During the last day of his visit Parvanov will open the exhibit of Bulgarian Thracian treasures.

The President and Firs Lady are going to visit the Shinto Meiji Shrine and will attend a sumo tournament with the participation of famous Bulgarian sumo wrestler Kaloyan Mahlyanov - Kotooshu.

Between May 13 and 16, Bulgaria will be visited by Princess and Prince Akishino, who is the second son of Emperor Akihito, and second in line to the throne. The visit will be part of the Japanese initiative "2009 - Year of Japan-Danube Friendship".

After the trip to Japan, Bulgaria's President and First Lady are heading straight to Vietnam.