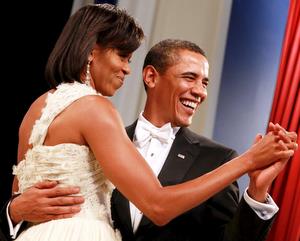 Their first dance was at the Neighborhood Ball, under the sounds of Etta James' "At Last," performed by BeyoncГ©.

Other celebrities at the Neighborhood Ball at the Walter E. Washington Convention Center included Stevie Wonder, Shakira, Mary J. Blige, Faith Hill Jay-Z, Alicia Keys, Adam Levine, will.i.am. from the Black-Eyes Peas, Sting and Mariah Carey. Movie stars, such as Leonardo DiCaprio, who dashed to DC from London where he was attending the premiere of his latest movie, were also in attendance.

Before the dance, Obama addressed the crowd, which erupted in applause when he entered the room.

"First of all, how good-looking is my wife?" Obama joked.

The president wore white tie, while the First Lady shined in a white, floor-length gown made by 26-year-old New York designer Jason Wu.

For the new President, the first ball was particularly important.

The second ball -- the Home State Ball, for Illinois and Hawaii - was held at the DC Convention Center.

"Hello, everybody. Aloha. What's going on?" Obama said and thanked many old friends in the crowd, who had been part of the couple's lives for awhile.

The Commander-in-Chief Ball, attended by many veterans and members of the military, was next. Obama and Vice President Joe Biden each saluted the nation's military men and women via satellite.

"It is wonderful to be surrounded by some of the very best and bravest Americans," Obama said. "Your courage, your grace and your patriotism inspire us all."

The First Couple split and Michelle danced with Marine Sergeant Elidio Guillen of Madera, California while the President had as a dance partner Army Sergeant Margaret H. Herrera of San Antonio, Texas, who was overcome by emotion and cried in the president's arms.

The Youth Inaugural Ball, where people between the ages of 18 and 35 gathered, the Home State Ball for Delaware and Pennsylvania, honoring Vice President Joe Biden were next. The night ended with the Obamas making brief appearances at the Mid-Atlantic, Western, Midwest, Southern and Eastern regional balls.

In addition to the Neighborhood Ball, the other nine also featured many stars such as Kid Rock and Kaney West at the Youth Ball, Cheryl Crow at the Midwest one, and Marc Anthony at the Western Ball.

The First Couple's last dance of the night happened shortly after 12:35 am Wednesday at the Eastern Ball.

Crowds waited in long lines to just take a glimpse of the President and Michelle. Those not lucky enough to score a ticket or an invitation could watch on television.

The balls were marked by the tough economic times and the gloom of the financial crisis. Guests who already paid anywhere from USD 75 for a ticket, in addition to thousands more for a trip package, had to buy their own drinks served in small plastic cups. Beer went for USD 6, cocktails for USD 9 and champagne for USD 12.