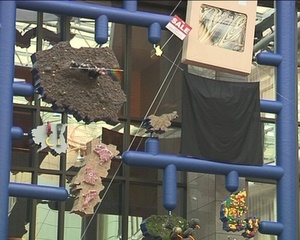 The step has been taken after Bulgaria's permanent Representation at the European Institutions has issued an official objection to the work, displayed at the European Council building in Brussels.

Last week, the Deputy Prime minister of the Czech Republic, Alexandr Vondra, has apologized for the insult inflicted on Bulgaria.

"I apologize to Bulgaria and its Cabinet if they feel insulted and I believe we are ready to initiate a constructive dialogue," he said.

The author of the exhibit, David Cerny has also stated that he was ready to remove the insulting pieces, and said he would return the money he has received for the creation of the display.

The Czech Republic, which now holds the EU presidency, has commissioned the 16-square-meter display to mark the start of the six-month Czech presidency of the EU, but they believed it was the work of 27 European artists.

The exhibit named "Entropa" was installed during the last weekend and has angered EU members with its form of a giant jigsaw map representing the "stereotypes" of each of the EU's 27.

Cerny has presented "Entropa" to his government with a brochure describing each of the artworks of the 27 supposed contributors from each member state. The artist has already apologized for misleading Czech ministers, but not for the installation itself.

"We knew the truth would come out. But before that we wanted to find out if Europe is able to laugh at itself," Cerny has said.