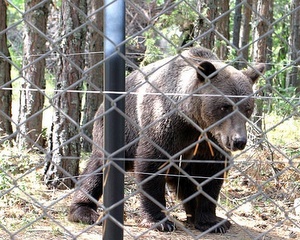 "The bears in our zoo do not hibernate during the winter because they eat regularly and that is why there is nothing weird about Yoana giving birth in January", the Director of the Lovech Zoo Dr. Feodor Vatsov said.

The gender of the cubs is still unknown as their mother does not allow the zoo keepers close to them.

The four-year-old brown bear Yoana became famous in February 2008 when she managed to grab a ten-year-old boy's jacket, wrapped around his waist, through a hole in the fence of her area.

The boy and a friend of his had come really close to the fence feeding the bears candy. The boy was only slightly scratched by the bear.

The visits to the Lovech Zoo will be free until the beginning of March, Dr. Vatsov announced, because some of the animals are kept only inside due to the low temperatures, and cannot be seen by the visitors.

The Lovech Zoo is the second largest zoo in Bulgaria after Sofia's zoo. It has 420 animals from 74 species. In 2008, the Zoo received an European License valid until 2013 certifying that it had appropriate conditions for keeping wild animals out of their natural environment.