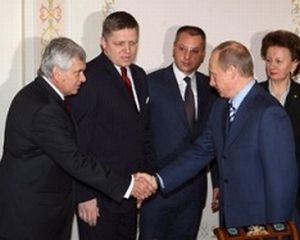 The Russian PM Vladimir Putin (right) greets the European Prime Ministers, including Bulgaria's Stanishev (next to Putin), before their talks on the natural gas crisis. Photo by BGNES
The Bulgarian Prime Minister Sergey Stanishev told his Russian counterpart Vladimir Putin in Moscow Wednesday that Russia and the Ukraine might suffer the most from the present gas crisis because they risked losing EU's trust.

Stanishev made an emergency trip to the Russian capital on Wednesday in order to take part in talks on the restoration of the Russian gas supplies to Europe a day after Gazprom formally announced the supplies were restored but the Ukraine said it could not let them through its transit system because of technical issues.

Bulgaria's Prime Minister was joined by his counterparts from Slovakia and Moldova, who also arrived to Moscow to speak with Putin.

Stanishev pointed out that the European states were fulfilling their part of the gas supply contracts, and that the Russia-Ukraine dispute had to be resolved as soon as possible because millions of Europeans were suffering from its effects.

"Not only has Russia done everything it could in order to restore the gas supplies for Europe, but it has also actually restarted them, while it is the Ukraine that is preventing them from reaching their destination", Vladimir Putin told the PMs of Bulgaria, Slovakia, and Moldova.

The Russian PM also said that while the Ukraine might be having technical problems with the natural gas transit, those were not Russia's problems, and the Ukrainian side had to take care of them itself.

"Our European partners have turned into hostages of the dispute between Russia and the Ukraine. But this dispute refers to the natural gas deliveries to the Ukraine. No transit state has the right to abuse its transit position, to speculate with it, and to turn the consumers into hostages", Putin stated.

The Russian President Dmitry Medvedev also met with the state leaders who came to Moscow for talks on the gas crisis.

"Our state cannot afford to lose this kind of money. The presents are over, we need to sue for our money with those responsible for this situation", Medvedev told the Gazprom head Alexei Miller insisting that the Russia side should file a suit for USD 1,1 B against the Ukraine, which Gazprom lost because of its blocked transit to European states.