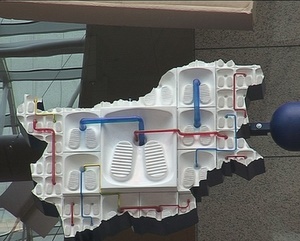 The work of alleged Bulgarian artist Elena Zhelebova, depicting Bulgaria as a toilet, has stirred controversial reactions in Bulgaria. Photo by Darik
The new art installation, raising many eyebrows, displayed at the European Council building in Brussels turned out to have been entirely completed by Czech artist David Cerny and two associates.

The Czech Republic, which holds the EU presidency, has commissioned the 16-square-meter display to mark the start of the six-month Czech presidency of the EU, but they believed it was the work of 27 European artists.

In an official declaration, Czech Deputy Prime Minister Alexandr Vondra said he was only informed on Monday that the installation was not the work of 27 European artists, but of David Cerny and two colleagues.

Vondra condemned Cerny, adding that the Czech EU presidency was considering what steps to take before Thursday's official launch. They said they would offer more details on January 15.

"An agreement of the office of the government with the artist clearly stated that this will be a common work of artists from 27 EU states. The full responsibility for violating this assignment and this promise lies with David Cerny, " Vondra stated.

The exhibit named "Entropa" was installed during the weekend and has angered EU members with its form of a giant jigsaw map representing the " stereotypes" of each of the EU's 27.

Cerny has presented "Entropa" to his government with a brochure describing each of the artworks of the 27 supposed contributors from each member state. The artist has already apologized for misleading Czech Ministers, but not for the installation itself.

"We knew the truth would come out. But before that we wanted to find out if Europe is able to laugh at itself," Cerny has said. "

The piece, representing Bulgaria as a toilet, has stirred controversial and angry reactions in Bulgaria. The country's permanent Representation at the European Institutions has issued an official objection to the work being displayed at the European Council building in Brussels. The Bulgarian Culture Ministry declared that they had nothing to do with the display and have not selected the artist to participate in it while the Czech ambassador to Sofia has been summoned at the Bulgarian Foreign Ministry to explain the gaffe.

The Bulgarian artist Elena Zhelebova, who is allegedly the author of the scandalous work depicting Bulgaria as a squad toilet has turned out to be a completely mysterious person, the Darik radio reported Tuesday.

A team of Darik reporters has found out that most galleries where the artist is said to have had exhibits have never heard her name. She is also unknown to some of the most renowned Bulgarian modern artists, despite the fact that she is supposed to be one of them. The Union of Bulgarian Artists further declared that they were not aware of such artist and she was not included in their lists or archives.

There were speculations that the person in question was a young author, residing abroad, or someone using the name Elena Zhelebova as an alias while the latest Cerny admissions have revealed that such person did not exist at all.