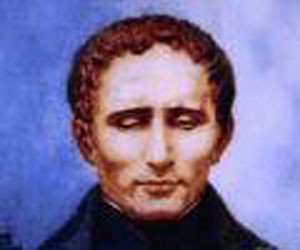 Louis Braille created "braille" - a world-wide system effectively used by blind and visually impaired people for reading and writing. Braille is read by passing the fingers over characters made up of an arrangement of one to six embossed points. It has been adapted to almost every known language.

Louis Braille was born on January 4, 1809. He became blind at the age of 3, when he accidentally stabbed himself in one eye with one of his father's workshop tools and got an infection, spreading to his other eye.

At the age of 10, Braille earned a scholarship to the Royal Institution for Blind Youth in Paris, one of the first of its kind in the world. Braille, a bright and creative student, became a talented cellist and organist.

At the school, the children were taught how to read by feeling raised letters - a system devised by the school's founder. However, with this system the students never learned to write. Another disadvantage was that the letters weighed a lot, making the books sometimes weigh over a hundred pounds.

In 1821 Louis began inventing his raised-dot system, finishing at age 15, in 1824. The system allowed the recognition of letters with a single fingertip, consisted of patterns making it easy to learn, and offered the possibility to both read and write an alphabet.

Braille later extended his system to include notation for mathematics and music. The first book in braille was published in 1829.

Braille died in Paris of tuberculosis in 1852 at the age of 43. His body was disinterred in 1952 (the centenary of his death) and honored with re-interment in the PanthГ©on in Paris.

The braille system was finally, officially recognized in France two years after his death, in 1854.