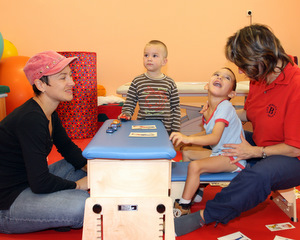 Bulgaria's Karin Dom, which is run by a Bulgarian NGO, was commended as an exemplary day care center for disabled children by the International Herald Tribune. (Sofia Photo Agency)
Bulgaria's day care center for disabled children "Karin Dom" located on the Black Sea coast in the city of Varna is an exemplary institution, according to an extensive article in the International Herald Tribune.

The IHT describes the advantages of the facility ran by the Karin Dom Foundation, an NGO dedicated to the early intervention and early inclusion of children with disabilities.

The article contrasts the unique approach to the care for disabled children at Karin Dom with the situation of state-run social institutions of this type in Bulgaria, which is described as "perhaps the poorest and most corrupt in the European Union".

The paper points out that the Karin Dom was initiated by the 79-year-old Ivan Stancioff, a descendant of Bulgarian diplomats, who returned in Bulgaria in 1990 after almost half a century of exile in the USA and the UK.

Stancioff has donated his restituted family villa on the Black Sea coast for the Karin Dom day care center, where 150 children a year (up to 30 children a day) now have consultations, physiotherapy, special classes, art and music sessions, swimming, integrated activities with other children, both at Karin Dom and outside.