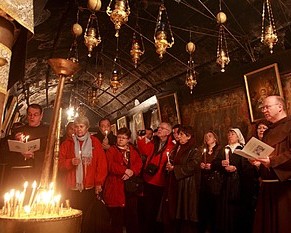 Christian worshippers pray at the 'Grotto', or cave, at the traditionally accepted birth place of Jesus Christ at the Church of the Nativity in the West Bank town of Bethlehem. Photo by BGNES
There is no room at the inn in Bethlehem, as the birthplace of Jesus of Nazareth is experiencing a fourfold increase in visitors this year.

All 3,000 rooms in Bethlehem have been fully booked for the Christmas holidays, Samir Hazboun, chairman of the Bethlehem Chamber of Commerce and Industry, reported.

By the end of 2008, 1.25 million visitors would have visited Bethlehem, which is a 96 percent increase from last year.

Seven past gloomy Christmases were celebrated in the city as tourism was severely hit by the rise of violence in the region. As forces loyal to Palestinian Authority President Mahmoud Abbas have consolidated control over the West Bank territories, unrest has sunk to a relative low.

Because of the sharp rise in tourists, unemployment in Bethlehem has gone down to 23 percent from 45 percent in 2007.