Israel Threatens Offensive into Gaza in Response to Rocket Fire 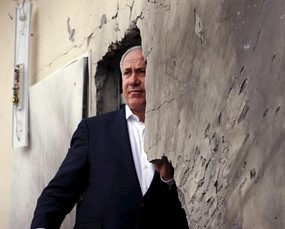 Benjamin Netanyahu, opposition leader of the Likud party, inspects the damage caused to an Israeli home by a rocket fired from the Gaza Strip. Photo by BGNES
Israeli government officials have threatened a major offensive into Gaza in response to rocket attacks launched from the Hamas-ruled territory.

Israel's envoy to the United Nations has already sent a letter to Secretary-General Ban Ki-moon stressing the nation's concerns while Israeli diplomats are to begin meeting with their counterparts abroad to discuss the situation, the Voice of America reported.

Defense Minister Ehud Barak said he has already ordered the army to create plans to respond to the attacks.