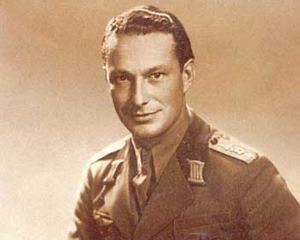 On December 20, 1943, in the sky above Sofia Spisarevski took down an American bomber by crashing deliberately his fighter into it.

That day a group of about 200 American B-24 Liberator bombers accompanied by P-38 Lightning fighters set out to bomb the capital of Bulgaria, which at the time was an ally of Nazy Germany. They were met by 36 Bulgarian Messerschmitt Me-109G-2 fighters.

Spisarevski was one of the pilots on duty in the Bozhurishte air base. During Spisarevski first and only air battle, he evaded two American fighters, headed to a group of 16 Liberators and, without ceasing fire, crashed into the leading bomber.

Spisarevski's machine crashed at the heights near the village of Pasarel close to Sofia. The American bomber crashed on the other side of the village.

For the taking down of a four-engine bomber, he was credited posthumously with three aerial victories and promoted to the rank of captain. Spisarevski was buried in the Walk of Pilots in the Central Sofia Cemetery.

Dimitar Spisarevski was born in the northeast Bulgarian city of Dobrich in 1916. His family moved to western Bulgaria after the Treaty of Neuilly, which ceded Northeast Bulgaria to Romania.

In 1938, Spisarevski graduated from the pilot fighter school in Werneuchen, Germany. In the summer of 1943, he was one of the two Bulgarian pilots sent to the English Channel to observe the aerial warfare tactics.

On Saturday dozens of Bulgarians gathered at the place of Spisarevski's crash in the village of Pasarel to pay tribute to his heroic act.

As one of the Nazi Germany allies in World War II, Bulgaria declared a token war on the UK and the USA on December 13, 1941.