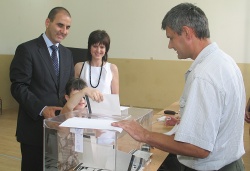 Tzvetan Genchev Tzvetanov was born on April 8, 1965 in Sofia.

Tzvetanov joined the Interior Ministry structures in 1987, and remained employed there until September 2005 eventually reaching the rank of a colonel. During this period he held various positions including "specialist", inspector, and senior inspector.

In 1988-1992, Tzvetanov completed a Master's degree at the National Sports Academy in Sofia, majoring in physical education, and acquiring the qualifications of a physical education teacher and track-and-field athletics coach.

In 1998-2000, Tzvetanov completed his post-graduate studies in law at the Institute for Post-Graduate Studies at the University for National and World Economy in Sofia.
Tzvetanov also has various additional qualifications in Spain and in the USA, in fighting illegal trafficking and terrorism, and has been awarded medals by the police services of France, Spain, USA, and Sweden.

With the founding of the GERB party on December 3, 2006, Tzvetanov was elected party chair as a surrogate for the informal leader of the party, the Sofia Mayor Boyko Borisov, and has held the position ever since.

Together with his wife Desislava, Tzvetanov has two daughters, Gergana and Vasilena.