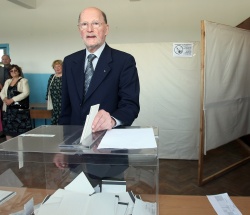 Simeon Saxe-Coburg-Gotha was born on June 16, 1937, in Sofia as the first-born son of Tsar Boris III of Bulgaria and Queen Giovanna.

Simeon's birth was celebrated all over Bulgaria with the ringing of church bells and cannon salutes. On the occasion of the happy event the royal couple granted amnesty to many prisoners, while schoolchildren were given an additional mark to their scores.

A few weeks later the crown prince was baptized with water brought specially form the Jordan River. The water was transported by a Bulgarian military pilot.

Simeon II ascended to the throne on 28 August 1943 at the age of 6, after the sudden death of his father, Tsar Boris III. He became the fourth Tsar ("Emperor") of the Third Bulgarian state.

Regency was appointed to rule Bulgaria on his behalf. After the communist-dominated Fatherland Front committed a coup d'etat on September 9 1944, Simeon II remained on the throne but the regents including his uncle Prince Kiril, and many of the country's intellectuals were executed.

Two years later, in 1946, following a referendum in which over 92% of the Bulgarians opted for republican government (there are allegations the results were forged with the aid of the Soviet Union), the minor Tsar Simeon, his sister Princess Maria Louise and Queen Giovanna were forced to leave Bulgaria, facing long years of exile.

The royal family first went to Alexandria, Egypt. Their choice of Egypt was not random. There, also in exile, lived Queen Giovanna's father Victor Emanuel, King of Italy. In Egypt, Simeon enrolled in the famous Victoria College.

In July 1951, the Spanish government of Francisco Franco granted asylum to the exiled Bulgarian royal family. In Madrid, Simeon Saxe-Coburg graduated from the Lyc?e Fran?ais, and studied law and political science.

In 1958 - 1959, he studied at the Valley Forge Military Academy and College in the United States where he was known as "Cadet Rylski No. 6883". He graduated as a second lieutenant. Once again in Spain, Simeon studied law and business administration.

Saxe-Coburg's official biography on the website of the Bulgarian Council of Ministers in 2001-2005 when he was the Prime Minister of Bulgaria lacked detailed information on what he did between 1962 and 1996. According to various sources, during this period he was a businessman, and the chairman of the Spanish subsidiary of Thomson, a French defense and electronics group for 13 years. He was also a consultant in the banking, hotel, electronics, and catering sectors.

Saxe-Coburg issued several political declarations during his exile through his "chancellery" in Madrid directed at the Communist regime in Bulgaria and his exiled compatriots but he did not set up a Bulgarian government in exile.

In May 1996, Saxe-Coburg visited Bulgaria for the first time after almost 50 years in exile.

He returned again to Bulgaria at the beginning of 2001 with the intention to settle there permanently. On April 6, 2001, in a very famous public statement Saxe-Coburg stated his intention to participate actively in the political life of the country by founding and leading a political movement that could improve Bulgaria's situation in a period of 800 days.

His enormous popularity and promises led his newly founded political movement called National Movement "Simeon the Second" to win the June 2001 Parliamentary Elections in a landslide.

The NMSS received 43% of the popular vote and 120 MP seats in the 240-seat Parliament. The NMSS formed a government in coalition with the ethnic Turkish Movement for Rights and Freedoms (DPS).

Thus, Saxe-Coburg became the first former monarch in world history to become a Prime Minister under a republican constitution. The NMSS party was formally founded in April 2002 by 900 delegates in Sofia.

In March 2004, 11 MPs left the party to form a new parliamentary group and later a new party called "The New Time," marking the beginning of the NMSS splits.

The NMSS party initially declared itself a conservative formation, and applied for membership with the European People's Party (EPP). After the rejection of the application over the opposition of the Union of Democratic Forces (UDF), already an EPP member from Bulgaria, the NMSS steered towards the center, turning into a liberal and centrist formation, to become a full member of the Liberal International during its Sofia Congress in May 2005.

During the election campaign, the NMSS repeatedly said it would not enter in coalition with the Bulgarian Socialist Party (BSP). After BSP failed to set up a Cabinet, the President offered the mandate to the NMSS, leading to a second unsuccessful attempt to create a new government. Finally, with the mandate of the third largest parliamentary group, the DPS, and after two-month long negotiations, the BSP, the NMSS, and the DPS formed a government of the so called three-way coalition. The BSP leader Sergey Stanishev became Prime Minister, and the BSP got 8 Ministers, the NMSS - 5 Ministers, and the DPS - 3 Ministers.

Saxe-Coburg, together with Stanishev and DPS leader Ahmed Dogan, became part of the so called "Governing Coalition Council", a meeting of the three party leaders that is not formally a state institution but de facto played such a role in determining policies then to be implemented by the Stanishev Cabinet.

On January 1, 2007, the three-way coalition government presided over Bulgaria's accession to the EU.

During the June 3, 2007 Party Congress, the NMSS split in two main fractions. The faction around Plamen Panayotov (the so-called "lawyers' lobby"), accused their colleagues (the so called "yuppies' lobby"), who were backing Milen Velchev, of manipulating the intra-party vote.

Several months later, 17 MPs (of the lawyers' lobby) left the party; 4 were expelled by the leader, Simeon Saxe-Coburg, and the rest left at their own will. They later formed the "Bulgarian New Democracy" (BND) parliamentary group, and a party with the same name.

The NMSS party congress on June 3, 2007 changed the party's name to National Movement for Stability and Progress (NMSP), placing the words for "stability and progress" to fit the Bulgarian acronym for "Simeon the Second". Thus, in Bulgarian, the acronym of the party - NDSV - did not change.

Just two years after Simeon's return, in 1998 the Constitutional Court made the decision to give back his family's estates. Yet, the topic of the so-called "Tsar properties" continues to be largely discusses and remains very controversial in Bulgaria's public and political life, including the latest saga surrounding the Krichim palace. Critics claim that Saxe-Coburg used his position as a Prime Minister, and later as one of the governing coalition leaders to receive ownership of estates that never technically belonged to the Bulgarian royal family before 1944.

In the last three years, Saxe-Coburg saw his party's ratings slum by over 10% the most serious decrease among the other ruling coalition parties, BSP and DPS.

In a series of interviews, the former Tsar and former PM has stated his doubt in the reliability of the pre-election polls and declared that the NMSP project was far from being over and to say that the party was extinct was the same as talking about the end of history, ideologies, the end of the world.

In addition to Bulgarian, Simeon Saxe-Coburg Gotha is fluent in English, French, German, Italian and Spanish.

By a decree of the President of the Republic, issued in 15 June 2007, Simeon Saxe-Coburg was awarded the Stara Planina Order, the highest State distinction in Bulgaria.

Saxe-Coburg is known for his unique style of being somewhat thrifty in his words, public statements, and interviews. While his party, NMSS (NMSP) initially tried to define itself as a conservative political formation, it later adopted a centrist-liberal ideology subsequently projected by its leader in his policies and statements.

In June 2001, thank to the enormous popularity of its leader Saxe-Coburg, the NMSP (called NMSS at the time) won overwhelmingly the Parliamentary Elections with 42,74% (1 953 000 votes), and got 120 seats in the 240-seat Parliament, one short of an absolute majority. This led Saxe-Coburg to become Prime Minister, and the first former monarch in the world to do so.