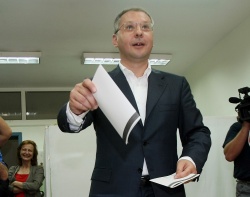 Sergey Dmitrievich Stanishev was born on May 5, 1966, in the town of Kherson, USSR (today in the Ukraine). Stanishev's family has a very interesting history of involvement with the political left.

Sergey Stanishev's father, Dimitar Yakov Stanishev, was born in 1924 in the village of Shtuka close to the town of Strumitsa in today's Republic of Macedonia (FYROM). At the age of 16, Dimitar Stanishev joined the Bulgarian youth communist organization RMS (Workers'-Youth Union).

In March 1944, Dimitar Stanishev joined the Chavdar Brigade of communist guerillas which then also included Todor Zhivkov, later to become Bulgaria's communist dictator (1954-1989), and Dobri Dzhurov, Minister of People's Defense (1962-1990). Dimitar Stanishev was the youngest partisan fighter in the Chavdar Brigade. Several months later, on September 8/9, 1944, the Red Army entered Bulgaria and the communist and leftist forces carried out a coup.

At the end of 1944, Dimitar Stanishev left for the USSR, settling first in the city of Kazan as foreigners were not allowed to live in Moscow at the time. In 1951, he graduated with a Bachelors' degree in Moscow, and in 1954 he completed his post-graduate studies in the foundations of Marxism-Leninism in the Moscow State University.

In Moscow, Dimitar Stanishev met his future wife, Dina Muhina, who is of mixed Northern Russian and Baltic German origin.

The two could not get married because at the time there was still a Stalinist law in force prohibiting Soviet citizens from marrying foreigners. Thus, their first-born son, Georgi Stanishev, (1952) was practically born illegally. At the end of the 1950s, Dina and her son Georgi arrived to Bulgaria, and that is when the Stanishev family technically started to live together.

Sergey Stanishev was born in 1966, and is 14 years younger than his brother. At the time of his birth, his mother was already 40, and preferred to deliver the child with the aid of her sister who was a gynecologist and a health clinic director in the town of Kherson, the former USSR, and today's Ukraine.

In 1955, Sergey's father, Dimitar Stanishev became the head of the department on International Communist and Workers' Movement in the Supreme Party School (i.e. AONSU - "Academy for Social Science and Economic Governance" in Sofia). In 1972, he became an Associate Professor there.

In 1956-1974, Dimitar Stanishev was a consultant at the Central Committee of the Bulgarian Communist Party on foreign policy and international relations issues.
For a brief period in 1974, Dimitar Stanishev was Bulgaria's Minister Plenipotentiary in Moscow, and, also briefly, in 1975, he joined the international editorial team of the Problems of Peace and Socialist Magazine in Prague, former Czechoslovakia.

In 1977, he was appointed the Secretary of the Central Committee of the Bulgarian Communist Party (the so called "Politburo"). He was also a deputy at the 7th, 8th, and 9th Assembly of the People's Republic of Bulgaria.

Sergey Stanishev's mother, Dina Stanisheva is still a Professor at the Slavic Studies Department of Sofia University. In her words, the political heritage and background of her husband created great difficulties for the young Sergey Stanishev at the beginning of the 1990s, and the only organization that was interested in employing him was the newly-reformed Bulgarian Socialist Party.

Sergey Stanishev graduated from today's 35th High School "Dobri Voynikov" in Sofia. In 1989, he completed his Bachelor's degree in history at the Moscow State University with outstanding grades. According to reports in the Bulgarian media, his senior thesis was entitled "The Role of the Uniform for the Combat Spirit of the Servicemen of the Red Army".

In 1994, Sergey Stanishev completed his Ph. D. in history at the Moscow State University. The topic of his doctoral dissertation was "The System of Service Promotion of High-ranking Civic Officials in Russia and Its Evolution during the Second Half of the 19th century".

In 1998, Sergey Stanishev specialized in political science at the Moscow School of Political Studies. In 1999-2000, he was a visiting fellow in international relations at the London School of Economies and Political Science in 1999-2000, where he completed a research paper on "Contemporary Foreign Policy of Russia".

At the beginning of the 1990s, Sergey Stanishev worked as a freelance journalist. He has over 50 publications on foreign policy issues in Bulgarian and foreign media.

Sergey Stanishev says himself he was committed to the Bulgarian Socialist Party from its very beginning when he was putting up posters in the Sofia streets during the 1990 political campaign.

In 1995, Sergey Stanishev received Bulgarian citizenship and renounced his Russian citizenship. He has repeatedly stated he had nothing to be ashamed of with his Soviet/Russian citizenship background.
His political career technically began in 1995 when he became a staff member in the Foreign Policy and International Affairs Directorate of the Bulgarian Socialist Party (BSP). In 1996-2001, he was the head of the Foreign Policy and International Relations Directorate at the Supreme Council of the BSP.

In May 2000, at the 43th Congress of the BSP, Sergey Stanishev was elected a Member of the Supreme Council and of the Executive Bureau of the BSP.

In June 2005, Sergey Stanishev was elected a MP at Bulgaria's 40th Parliament. He was the first candidate on the BSP proportional representation ticket in 2nd Electoral District (Burgas). His party BSP and its "Coalition for Bulgaria" won the greatest number of votes - 31%.

Stanishev remained MP until August 16, 2005, when the BSP together with the National Movement "Simeon the Second" (renamed National Movement for Stability and Progress in 2007) of the former Tsar and former Prime Minister Simeon Saxe-Coburg, and the ethnic Turkish Movement for Rights and Freedoms (DPS) formed the government of the so called "three-way coalition".

In the new government, Stanishev became the Prime Minister, and his party BSP retained 8 Ministerial seats; the NMSS (NMSP) received 5 seats, and the DPS received 3 seats. The 8:5:3 formula corresponded to the number of MPs each party had in the 240-seat Bulgarian Parliament: BSP - 82, NMSS - 53; DPS - 34.

Stanishev's swearing in office on August 16, 2005, was marked by a gaffe as the newly elected Parliament Chair, Georgi Pirinski from the BSP, went ahead and inaugurated only Stanishev as a Prime Minister instead of inaugurating the whole cabinet. Thus, the swearing in office ceremony had to be repeated. According to right-wing opposition critics, such a move was illegal.

Despite the later break-up of the NMSP which was left by 17 MPs in 2007, Stanishev's government of the three-way coalition survived a total of eight no confidence votes, all of those by comfortable margins.

In November 2008, Sergey Stanishev was reelected as Chair of the BSP at the party's 47th Congress in Sofia. He was the only candidate and received 97,5% of votes of the party delegates. It was then that Stanishev declared BSP's intention to vie for a second government mandate in a row.

In November 2008, Stanishev presented his book "Because We Are Socialists", which is practically an ideological resume of his views on the philosophy of the modern European-type socialist as espoused by the Bulgarian Socialist Party.

With the advent of the global financial and economic crisis in the fall-winter of 2008, the three-way coalition government adopted the so called "Stanishev Plan" for propping up the Bulgarian economy. The plan provides for preserving macroeconomic stability while increasing the government investments and social spending from the state budget surplus.

Sergey Stanishev is fluent in Russian and English, and has a working knowledge of French and Polish.

He has never been married has no children but he lives out of wedlock with his long-time girlfriend, the popular Bulgarian journalist Elena Yoncheva (born 1964).

According to his own account, Stanishev loves classical music, jazz, and rock. His favorite musicians are Mozart, Beethoven, Rahmaninov, Prokofiev, Beetles, Queen, Armstrong. Stanishev is also known for being an ardent lover of rocker motorcycles.

Sergey Stanishev has became the fourth Chair of the Bulgarian Socialist Party after it was renamed and reformed in 1990. He is said to represent the modernization of the BSP and its espousing of a European-type socialism as well as its outreach to the younger people.

His leadership marked the peak of BSP's efforts to be legitimized as a contemporary socialist/social-democratic party doing away with its communist past. This was practically achieved with the full member of the BSP in the Socialist International (2003) and the Party of European Socialists (2005).

Stanishev's recent book "Because We Are Socialists" outlines his views on a modern socialist development for Bulgaria. In it, he criticizes certain aspects of the communist past of Bulgaria but argues that the Bulgarian right had not managed to carry out the necessary reforms in the post-socialist transition, and that the European-type socialism is the major viable route for development of Bulgaria.

His government's "Stanishev Plan" for tackling the effects of the global financial and economic crisis on Bulgaria in 2008-2009, provides for preserving the country's macroeconomic stability and budget surplus policy while increasing the public welfare, employment, and infrastructure spending.