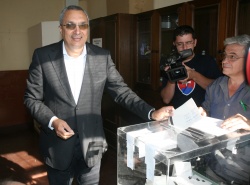 Ivan Yordanov Kostov was born on December 23, 1949, in Sofia. He graduated from the University of National and World Economy, Sofia (then known as the Karl Marx Institute), with a degree in economics in 1974.

In 1981, Kostov graduated with a degree in "mathematical modeling of economic processes" from the Sofia University "St. Kliment of Ohrid". In 1983, he completed his Ph. D. in economics at the Karl Marx Institute; the topic of his doctoral thesis was "Economic Growth, Structure and Factors in the Manufacturing Sphere".

In 1979, Kostov became an Assistant Professor at the Technical University in Sofia (then known as the High Machine-Electrotechnical Institute "Vladimir Lenin") at the Political Economy Department. In 1981, he became a Chief Assistant Professor, and in 1992 - an Associate Professor of "Theory of Market Economy".

In his earlier years, Kostov has also been a worker at the Light-Current Factory in Sofia where he first met his future wife Elena in 1967; a planning department manager at the paper processing plant in Sofia; an aerologist in the Hydrology and Meteorology Institute in Sofia; he has also been trained as an agriculture plane pilot in the town of Kremenchuk in the USSR (today's Ukraine).

In his job as a university professor, Kostov has been followed by the State Security service of the communist regime, and suspected of anti-communist views; a report of his department dean at the time, however, states that Kostov was a "convinced Marxist and defender of the socialist system".

In June 1990, Kostov was elected a Member of Bulgaria's VII Grand National Assembly on the ticket of the Union of Democratic Forces (which at the time was still an umbrella organization for all anti-communist groups).

He then became the Minister of Finance in the technocratic coalition government of Prime Minister Dimitar Popov (December 1990-November 1991) as one of the three UDF Ministers.

In 1995-1997, the Socialist government of PM Zhan Videnov brought the country to an unprecedented economic and banking crisis. The UDF and its leader Kostov led the fierce mass street protests that eventually led to the government's resignation in January 1997.
In February 1997, the Union of Democratic Forces turned into a single unified party led by Ivan Kostov.

In April 1997, the UDF (as part of a wider coalition - United Democratic Forces - won overwhelmingly with 52,26% (2 224 000 votes), and got 137 MPs, and formed a government led by Ivan Kostov, which stabilized the economic situation, and decisively sought accession to the EU and NATO. Kostov's Cabinet carried out long-delayed economic reforms and privatization of state-owned enterprises.

In March 1998, the UDF became a member of the European People's Party.

In December 1999, Bulgaria received an invitation to begin accession talks with the EU. Kostov was a firm supporter of Bulgaria's Euro-Atlantic, pro-Western orientation. His government's took NATO's side in the 1999 Kosovo Crisis; much of the efforts for Bulgaria's accession to NATO and the EU were carried out during his term.
Kostov's rule has been criticized for political patronage and scandals involving the favoring of certain political and economic circles, for corruption and organized crime.

In 2004, following internal disagreements, Kostov and a group of his supporters left the UDF in 2004 to found a new party, Democrats for Strong Bulgaria (DSB), which claims to be a right-wing party of the Christian-Democrat/Conservative type. The DSB has taken a firm stand against the alleged interference by Turkey and Russia in Bulgaria's internal affairs.

In the spring of 2009, Kostov's DSB and his former party, the UDF, set up the so called Blue Coalition with joint tickets for the 2009 European Parliament and Bulgarian Parliamentary Elections. Together with Marting Dimitrov of the UDF, Kostov became the Co-chair of the coalition.

Ivan Kostov married his wife Elena in 1974. They have two daughters - Yana and Mina, both of whom are married. Kostov has two grandsons - Ivan and Viktor.

Kostov is known for his healthy lifestyle, and for being a vegan.

Ivan Kostov is a strong proponent of free market economy and rightist (Christian-Democrat) economic and government policies. He is known for his strong pro-Western orientation, and for being firm on Russia's influence on Bulgaria as well as on Turkey's role in Bulgarian politics and Turkey's EU membership aspirations.

In June 1990, Kostov was elected a Member of Bulgaria's VII Grand National Assembly on the ticket of the Union of Democratic Forces

In December 1994, Kostov was elected MP on the UDF proportional representation ticket; the UDF lost the elections to the Bulgarian Socialist Party (BSP) and its coalition.

In April 1997, Kostov was elected MP on the UDF ticket but headed Bulgaria's Cabinet (1997-2001); the UDF won overwhelmingly over the BSP

In June 2001, Kostov was elected MP on the UDF ticket; however, the UDF lost the elections to the party of Bulgaria's former Tsar Simeon Saxe-Coburg, NMSS (NMSP).

In June 2005, Kostov was elected MP on the ticket of his newly founded party "Democrats for Strong Bulgaria.