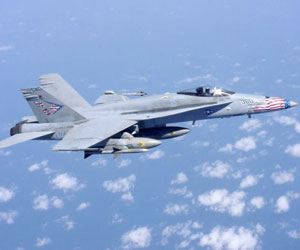 Two houses were destroyed in the crash, and at least three people in them have been killed - two adults and a child. A fourth person is reported missing. The fighter's pilot has managed to eject, and is safe, according to the US Marine Corps.

According to the San Diego Mayor Jerry Sanders, the four persons were a mother, a grandmother, and two children, and were in one of the two homes destroyed by the crash and the ensuing fire.

The F/A-18 Hornet plane crashed three kilometers away from the Miramar Air Station of the Marine Corps where it was supposed to land.

It was returning to the base after landing training on an aircraft carrier of the US Navy. Before the crash the pilot reported trouble but its nature is unknown, and the military are investigating the incident.