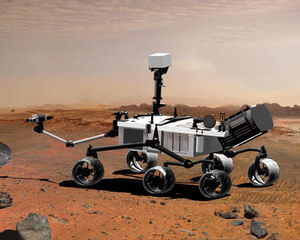 Artist concept of the Mars Science Laboratory. Photo by NASA/JPL-Caltech
NASA delays the launch of its next Mars mission due to lingering technical issues that should be solved before the next-generation robotic rover is sent to the surface of the Red Planet in 2011, as scheduled now.

A launch date of October 2009 for the Mars Science Laboratory is no longer feasible because of testing and hardware challenges that must be addressed to ensure mission success, NASA announced.

"We will not lessen our standards for testing the mission's complex flight systems, so we are choosing the more responsible option of changing the launch date," said Doug McCuistion, director of the Mars Exploration Program at NASA Headquarters in Washington.

The advanced rover is one of the most technologically challenging interplanetary missions ever designed, using new technologies to adjust its flight while descending through the Martian atmosphere, and carrying advanced research instruments.

Rigorous testing of components and systems is essential to develop such a complex mission and tests during the middle phases of development resulted in decisions to re-engineer key parts of the spacecraft, NASA said.

As Earth and Mars come close to each other only once every 26 months, the next chance for launching is not until fall 2011.