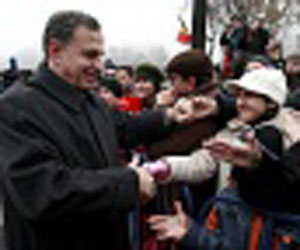 With over 99% of the vote counted, the ex-communist Social Democrats (PSD) had won about 33,9%.

The difference in the votes won by the two leading parties is 0,67% and if these figures are confirmed, tough coalition talks are certain since none of the parties would have a majority.

The results also showed the ethnic Hungarian Party with more than 6% of votes while the nationalist Greater Romania Party is failing to reach the 5% minimum.

Earlier, two polls that have been highly reliable in past elections, predicted that the Social Democrats would win the elections.

Social Democrats' leader Mircea Geoana continued to insist that his party would win.

President Traian Basescu is not obliged by law to nominate a Prime Minister from the winning party. He proposes a candidate, and parliament then votes on whether to validate his choice.

Some 18 million voters cast votes for both chambers of the 452-member Parliament on Sunday. Officials said turnout was just under 40%.

As the vote count continued, about 10,000 people turned out in Bucharest to watch a military parade marking the country's National Holiday. President Basescu laid a wreath at Bucharest's Triumphal Arch.