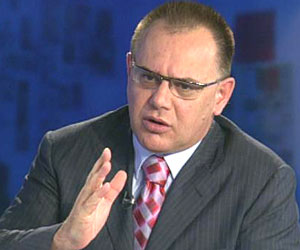 The publisher of the Croatian newspaper Nacional was assassinated in Zagreb Friday in a car bomb attack. Photo by dnevnik.hr
The Bulgarian and Croatia mafias cooperate very closely to the extent that they help each other with gangland assassinations.

This was stated Saturday by the Serbian journalist and regional organized crime expert Milos Vasic in an interview for the Free Europe Radio about Friday's murder of the publisher of the Croatian paper Nacional Ivo Pukanic, and of his associate Niko Franic, Darik Radio's correspondent in Belgrade Eli Yurukova reported.

According to Vasic, the cooperation between the Bulgarian and the Croatian gangsters was especially close, and that if the mafia in either country wanted somebody dead, a special team from the other came over, carried out the assassination, and went back immediately.

There are various allegations about who might have ordered the murder of Ivo Pukanic in the Balkan media. The guesses range from Albanian mobsters to members of Serbia's Zemun Clain, to Croatian mafia with links to the authorities.