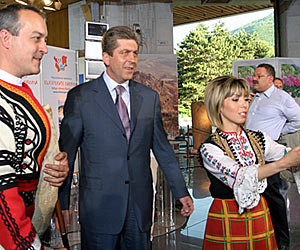 Bulgaria chose its national symbol for the future Euro coin design after citizens' voting and a final discussion, attended by the President Georgi Parvanov (C). Photo by Nadya Kotseva (Sofia Photo Agency)
Bulgaria chose Sunday the Madarski Konnik (Madara Horseman) for the design of the future Bulgarian Euro coins after a one-year debates in the framework of the national symbol campaign.

The relief near Bulgaria's town of Shumen gathered a total of 25% of all citizens across the country, who voted for months to choose between the rose, the Rila monastery, Madara Horseman and the Cyrillic alphabet.

The final discussion is to take place in the National museum of History, as Bulgaria's President Georgi Parvanov has also attended it.

The relief depicts a majestic horseman thrusting a spear into a lion lying at his horse's feet while an eagle is flying in front of the rider and a dog is running after him. The scene symbolically depicts a military triumph and was engraved in the rock during Khan Tervel's rule.