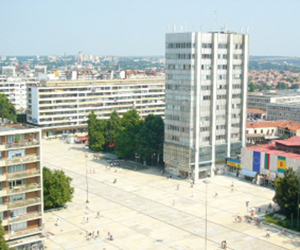 The city of Dobrich became Tuesday the tenth Bulgarian municipality to have recognized the Armenian Genocide. Photo by bgpinternational.com
The Municipal Council of the northeast Bulgarian city of Dobrich adopted Tuesday a declaration recognizing the genocide over the Armenian people in the Ottoman Empire in 1915-1922.

Twenty-five of the total of 32 municipal counselors voted in favor of the declaration, one voted against, and five abstained, the Bulgarian private Darik Radio.

Before the voting, the regional leader of the ethnic Turkish Movement for Rights and Freedoms Denis Noman suggested that the issue be removed from the agenda because it was a matter of interstate relations, not of local government.

The motion of the Municipal Council was approved by Armenian community in Dobrich whose representatives were present during the voting.

They did not fail to point out that Bulgaria was the first country to offer asylum to the Armenian families, who were chased away by the Ottoman authorities.

Over 40 000 presently live in Bulgaria but only about 200 live in the city of Dobrich.

With Tuesday's declaration Dobrich becomes the tenth Bulgarian municipality, which has recognized the Armenian genocide, including the cities of Burgas, Ruse, and Silistra.

On April 24, the international Armenian Genocide Remembrance Day, the Sofia City Council honored the memory of the genocide victims. A similar declaration was read there but the Council failed to vote on it as it was taken off the agenda with the motive that the issue was not within its competence.