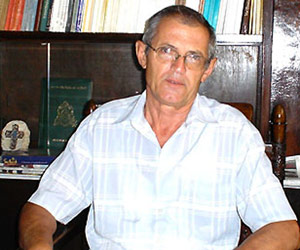 Professor Rasho Rashev, director of the National Archaeological Institute with the Bulgarian Academy of Sciences, is among the victims of the Sofia-Kardam night train fire. Photo by bnr.bg
Rumours that the fire in a Bulgarian train that killed eight was an assassination attempt against a famous archeologist have spread in his hometown of Shumen.

Professor Rasho Rashev, director of the National Archaeological Institute with the Bulgarian Academy of Sciences, was among those who died in the Sofia-Kardam night train fire.

The 64-year-old renowned expert and lecturer in Bulgaria's Middle Age history was identified following an autopsy and DNA analyses.

Rashev's colleagues local 24 Hours daily an assassination attempt might have been provoked by his efforts against treasure looters.

An official from the National Archaeological Institute sent on Saturday an SMS with a similar hint to Svetoslav Spasov, MP from the town of Shumen.