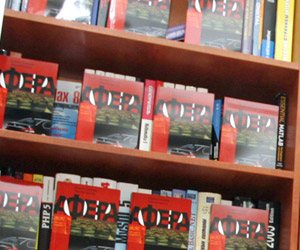 Photo by Yuliana Nikolova (Sofia Photo Agency)
"Secret Transit" is an investigating material by Darik radio crime reporter Bogdana Lazarova on the state-organized trafficking in Bulgaria. It was published in the book, called "Affair", written by Bogdana Lazarova and her colleague Nikolay Hristov. Novinite.com is publishing the whole material, dividing it into several installmentrs.

Here is the third one:

The state-owned companies officially signed contracts with a number of foreigners, predominantly citizens from Arab countries, providing for the smuggling of a number of different goods. The foreigners have been allowed to freely enter the buildings of a number of companies and the offices of clerks and have even advised Bulgaria how to better organize the smuggling transit, so that it becomes more and more profitable.

According to Kintex officials the trade in weapons is classified as secret transit, just as documented by official documents, because weapons were exported abroad with no permits and transported along the same contraband channels as cigarettes, alcohol and luxury goods. The goods usually landed par avion at Sofia airport, moved to one of Kintex bases in Sofia and were loaded onto new containers, and after waiting for the right moment, when the foreign national or the State Security officer supporting him were alerted, they headed most often to Turkey, loaded upon trucks. At the customs these trucks, loaded full of weapons, were never checked. The long vehicles were equipped with special secret compartments or the smuggled goods that they are transporting. It was very difficult, almost impossible to find the secret compartments even in case of an accidental check by the customs officials. The customs officials usually were not even aware of the volume and type of the smuggled goods, that knowledge was shared only with the officials working at the border checkpoints. It is known that in the earlier years it was ordered that certain cars and trucks are not checked and be let though with no hassle. Later on, however, the practice, a sort of a direct admittance to contraband, was suspended and the loads were transported without any warning to the border checkpoint. The officer, who served as support to the foreign national, intervened only when in cases of emergency, when a customs official, unaware of the scheme, tried to put the truck or the car under detailed scrutiny. The officer was carrying with him a special map, which he showed in cases such as these, and it secured the free pass of the smuggled goods.

Kintex had three bases in Sofia to load the smuggled goods. When weapons were smuggled, however, they often traveled to Turkey by sea, through the ports of Varna and Burgas, loaded aboard Bulgarian or foreign ships. The money, especially in the early years, was brought in suitcases, which were handed over to Bulgarians abroad. That's the reason why the illegal currency transfer, which was entering Bulgaria, is considered to be a unit in secret transit chain. In the later years, after 1985, the payments were made thought the trans-border companies that were established by the State Security and the Foreign Trade Ministry most often in offshore zones, covered up by local people - agents of the secret police.

Kintex annual turnover from secret transit totaled about USD 100-150 M, while the revenues ranged from USD 5 M to USD 15 M. The first huge Bulgarian deal for exports of weapons was for Algeria in 1961-62 and it was carried out by the Chief Engineering Department with the Defense Ministry.

According to Kostadin Chakurov the secret transit route was also supervised and controlled by the services of other countries. Chakurov claims that all special services of the countries involved knew about the secret transit and were paid to cover it up. The transit itself was in the hands of huge companies - not everyone has the chance to mastermind the traffic of gold and silver from Switzerland or cigarettes Marlboro. This can be done by companies such as the British American Tobacco, Chakurov says. They save on the excise duties and pocket money. Chakurov claims that it was only Bulgaria-produced weapons that were trafficked over the channels for secret transit, since the Soviet Union used totally different channels. There was a ban on the transit of weapons, manufactured in other countries.

Documents show that the governmental decree from 1967 that makes Kintex a monopolist over the secret transit trade turns it into a regulated practice, and the currency revenues start to flow into the Centralized Currency Fund of the company, while 25% of it is transferred directly into an account of the Interior Ministry. Probably because of the increasing competition between the First and Second Head Departments of the State Security or fears over the increasing influence of Kintex, which started to turn into a state within the state, the Second Head Department is undertaking steps to shut down the Centralized Currency Fund and suspend the currency transfers to the accounts of the Interior Ministry. This leads to the adoption of the 503rd secret order of the government, dated June 29 1969, which obliges the Foreign Trade Minister to draw out regulations for the activity and organization of Kintex company. Even though ever since 1969 there are no grounds for transferring currency to the accounts of the Interior Ministry, Kintex continues to transfer dollars to the non-budget account over the next two years until June 1971 when steps are being taken to directly close the Centralized Currency Fund with the company. It was only on December 13, 1971 that this happens.

A report by Foreign Trade Minister Hristo Hristov, dated January 30, 1978 and stamped "highly confidential", reveals that over the last three years, up to 1978, the secret transit activities expanded, the net profit towered to USD 12-17 M per year, while the turnover exceeded USD 100 M.

This, however, did not remain unnoticed by some neighboring countries on whose territory the secret transit route was passing. It becomes more difficult to carry out the operations and this makes it necessary that they are organized in a new and more covert way. Kintex, however, has been conducting secret transit operations for more than ten years, generating a steady flow of revenues in foreign currency. Another report by Foreign Trade Minister Hristo Hristov and Interior Minister Dimitar Stoyanov to the head of the Council of Ministers Grisha Filipov, dated July 25 1978, points out that revenues for the latest five-year-period totalled BGN 50 M in currency. On the other hand, however, Kintex main operations had a huge impact for the conducting the party and governmental policy in developing countries, Hristov comments and suggests that the secret transit operations are better covered up as foreign trade activities. That's how a new governmental decree, dated July 31, 1978, stamped "highly confidential", is issued to outline the new framework and rules in secret transit trade. From now on the trade will be conducted only by Kintex and its representative offices across the country.

"The transit will be conducted so that foreign companies and persons are held responsible. Bulgarian vehicles may be used outside Bulgaria only after the foreign trade, transport and interior ministers give their permission in advance in writing."

In this way the secret transit continues at full speed over the next seven years up to 1985, when a new decision of the bureau of the Council of Ministers, dated August 9 1985, stamped "highly confidential" and issued in only one copy, rules that the Foreign Trade Minister supervises the organization of the secret transit trade outside Bulgaria. That's how it came to the extraordinary sitting of the Interior Ministry, held on January 6 1986, attended by numerous famous officials: the Interior Minister Dimitar Stoyanov, the head of the First Department of the Secret Services General Stoyan Savov, the Deputy Interior Minister Iliya Kashev, the head of the Second Department Georgi Anachkov and few others. The interior minister announced that Victor Mihaylovich Chebrikov told him how the Economic Department in the Soviet Republic became independent and it would be good if Bulgaria did the same. Minister Stoyanov said he informed the Secret Services' generals about that after a talk to his deputy Grigor Shopov, who had to be notified about everything that happened in those structures.