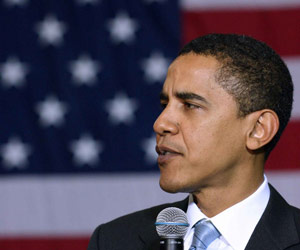 On Saturday Obama won decisive victories in three more states - Louisiana, Nebraska, and Washington. In the Louisiana primary he got 53% of the votes against 39% for Clinton.

In the Nebraska caucuses voting, Obama received 68% support vs. 31% for Senator Clinton. In the Washington caucuses, he got again 68% vs. 32% for his rival.

On Sunday the democrats in the state of Maine are voting in the Democratic primary where Obama and Clinton fight for 24 delegates to the national party convention. The race between them will continue on Tuesday in Maryland, Virginia, and in Washington, D.C.

Obama answered indirectly to critique by Clinton, and the Republican John Maccain regarding his lack of experience to do well in the White House by stating that the question today was not who had the most experience but which candidate would likely bring more change to Washington.

Meanwhile in the Republican Party race, former Arkansas governor Mike Huckabee won over Arizona Senator John Maccain in Kansas and Louisiana. Huckabee and the third candidate Ron Paul are coming under increased pressure to give up the race in favor of the leader John Maccain in order to boost the unity of the party. Maccain's main rival Mitt Romney announced he quit the race on Thursday.