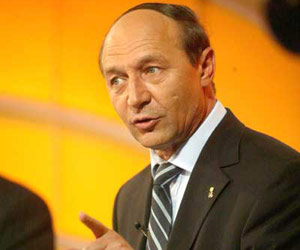 Romanian President Traian Basescu stated firmly that his country would not recognize independent Kosovo.
The Romanian President Traian BДѓsescu stated Thursday night that his country would not recognize Kosovo if the Serbian province declared independence because this would send a wrong message to other minorities elsewhere and would damage traditional international law.

"We will not recognize Kosovo's declaration of independence no matter whether it is unilateral or coordinated" BДѓsescu promised at the German Marshall Fund Conference in Brussels, adding that this would lead to implosion of other multiethnic societies or states where internal conflicts had been frozen for some time.

BДѓsescu underscored that Kosovo's independence would cast a shadow over the UN Charter and the Final Act of the Helsinski Conference for Security and Cooperation in Europe which had guaranteed a 60-year peace in Europe. He called for more negotiations between Belgrade and Prishtina.

The foreign minister of Cyprus also stated that his country opposed Kosovo's independence since it would turn into a dangerous precedent in international politics. Spain, Greece, and Slovakia have also expressed misgivings that Kosovo's recognition would spur other separatist reactions.

Meanwhile the USA and most European countries declared their readiness to recognize independent Kosovo without a UN Security Council resolution. Russia remains firmly opposed to Kosovo's independence without Serbian consent.

The leadership in Prishtina have stated that they would declare independence after the presidential elections in Serbia are over.