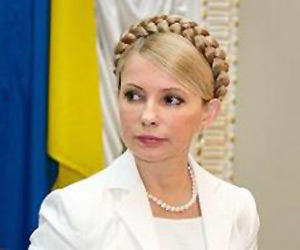 Charismatic Yulia Tymoshenko was elected the new PM of Ukraine after two votes held last week in the parliament left her stranded by just one vote short. Photo by itar-tass.com
Ukraine's parliament voted Tuesday in favour of Yulia Tymoshenko becoming a prime minister of the country for the second time.

The businesswoman, who is widely known as the gas princess of Ukraine, was narrowly elected by 226 votes in a 450-seat parliament.

It was the third time the parliament voted for prime minister following the two sessions held last week, which had left the leader of the Orange revolution in 2004 stranded with just one vote short of the majority needed.

The results shocked the orange coalition and Tymoshenko accused the rival parties, loyal to the outgoing PM Yanukovitch of rigging the vote.

During the last vote, MPs were asked not to use the electronic system and just raise hands one by one, which finally made Tymoshenko the new PM.

The political career of Tymoshenko, who was PM in 2005, rode the wave of the orange revolution and political experts say she favours western integration over closer ties with Russia.

Her standing varies in different parts of the country as in western Ukraine she has almost iconic image while in the east of the country many dub her a "devil in a skirt."