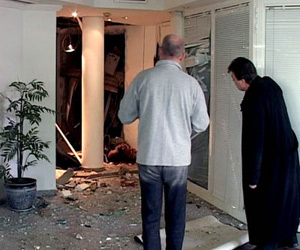 Four people, including Stoil Slavov, one of the owners of Interpetrolium and Partners, died in the blast at insurance company Bul Ins in January 2004. Photo by Interior Ministry
Bulgarian prosecutors and organised crime police have searched the office of oil trade company Interpetroluim, whose owner was blown up in the elevator three years ago.

The raid was part of an operation in 20 offices in capital Sofia and seven other towns on Thursday, belonging to companies owned by the notorious Marguin brothers and their associates.

Interpetroluim office is located at the headquarters of insurance company Bul Ins on James Boucher boulevard, which is just one of the locations searched by prosecutors and police.

Stoil Slavov, believed to have been linked to the obsolete ex-grouping SIC, and three of his bodyguards were blown up in January 2004 after a deadly blast ripped the headquarters of insurance company Bul Ins in Sofia.

Nobody claimed responsibility for the attack, which came after a wave of turf war-connected murders and assaults in the country.

Following a nine-month investigation, the case came to a deadlock, never to be resumed due to lack of evidence and clues.